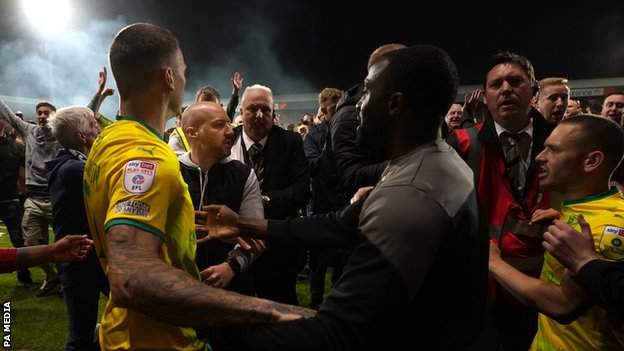 Vale followers swarmed onto the pitch after the final penalty and tv footage appeared to indicate some in an altercation with Swindon gamers.

“There was physical abuse out there, there was verbal abuse,” stated Garner.

He informed BBC Radio Wiltshire: “I’m very proud of the players for the strength they’ve just shown. There’s a lad with a cut on his nose, there’s been all sorts of abuse.

“I simply do not perceive it, I simply do not know the place that is coming from. I’ve seen it in among the different video games not too long ago. Disgusting. It is disgusting.”

Garner said action needed to be taken by the football authorities, following a series of incidents.

A person was jailed on Thursday for headbutting Sheffield United captain Billy Sharp at the end of the Blades’ Championship play-off semi-final defeat by Nottingham Forest on Tuesday.

In the meantime, Crystal Palace boss Patrick Vieira was involved in an altercation with a supporter during a pitch invasion following the club’s dramatic Premier League defeat at Everton.

The Frenchman appeared to kick out at the fan before being ushered a way by other supporters after Everton came back to win and retain their top-flight status.

“It is simply not on. Followers suppose they’ll come on and so they can have a free hit and a free pop and nobody participant can react to it. Should you did that on the road you’d find yourself in a tear up.

“But I’m really proud of how they responded and the class that they have showed, as they have done all season.”

Empty store on Oxford Excessive Road might be remodeled into diner