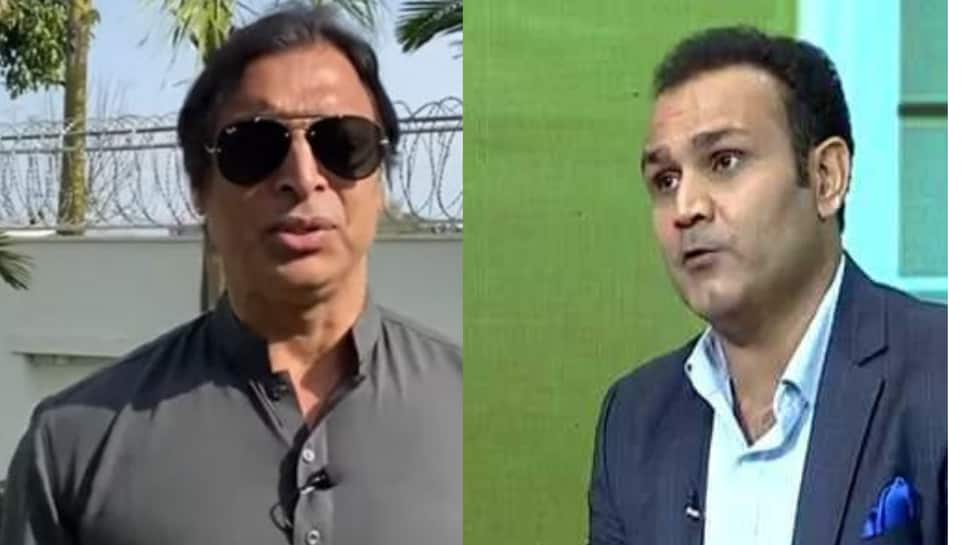 Two former cricketers across the border have begun to take potshots at each other. Virender Sehwag and Shoaib Akhtar used to have many a go at each other during their playing days and that action used to be exciting for fans on both sides of the border.

Years have passed since their retirement but Viru and The Rawalpindi Express have not forgotten those clashes. Now the battle happens through social media and interviews.

In a recent interview, Sehwag had made a big statement on Akhtar, saying that world’s fastest bowler used to chuck during his playing days.

“Shoaib knows he used to jerk his elbow; he knew he was chucking too. Why would ICC ban him otherwise?” #VirenderSehwag said#ShoaibAktharhttps://t.co/nsHbKxeDVz

He had said,”Shoaib knows he used to jerk his elbow; he knew he was chucking too. Why would ICC ban him otherwise?” Sehwag said on the third episode of ‘Home of Heroes’ on Sports 18. “Brett Lee’s hand came down straight, so it was easy to pick the ball. But with Shoaib, you could never guess where the hand and the ball will come from.”

Akhtar has now responded to this accusation by passing on an advice to Sehwag. And that advice is to not pass such comments.

“I would request Sehwag to not pass such comments. If Sehwag knows more than ICC, he is entitled to his opinion. My statement to Sehwag will be a bit different. I feel he was one of the greatest match-winners India has ever produced. He was a team man and among the greatest openers to have ever played for India. At the moment, I am at that stage and age where I’m careful while dishing out my opinions. I don’t want to pass a comment or insult any player who has played on the national level,” Akhtar told Sportskeeda.

Akhtar added that he has not seen that interview and that he would not mind if Sehwag was merely joking.

“I haven’t seen the interview. Sehwag is a close friend but I don’t know if he has commented jokingly or if he is being serious.”

He further said that cricketers on two sides of the border should understand the importance of their words and should not disturb the harmony between India and Pakistan.

“Cricketers should make sure their statements don’t disturb the harmony between India and Pakistan. If there’s a scope for improvement in relations between the two countries, I should be able to play that bridge. I request Sehwag to be mindful while making such statements in the age of social media,” Akhtar said.

Opinion | The Jays have weathered the early storm, even with bats gone chilly. The schedule-maker performs nicer from right here